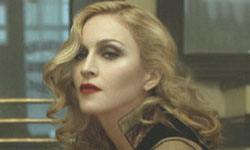 Madonna‘s new song called “Broken,” which has not been released yet, has apparently been leaked online. The song was produced by Paul Oakenfold, who is one of the top Trance DJ’s and producers.

Paul has previously remixed a variety of songs from Madonna, like “What It Feels Like For A Girl”, “Hollywood”, “American Life”, “Sorry” and later in 2008 “Give It 2 Me” from her album Hard Candy, Paul went on tour with Madonna for two months opening her presentation in the Confessions Tour, previously he had supported her in 2004 at Slane Castle in Ireland. His sets lasted for an hour and a half, followed by Madonna’s two-hour show.

Apparently, the song was from a studio session that the two had back in 2009 and was supposed to be featured on the new album. It is not currently clear if the song will be removed from the release now that it has leaked online. Paul Oakenfold is also gearing up to release his own album, which will be titled “Pop Killer.” It will be the third album of his career, but most of the details regarding the album have been kept under wraps.