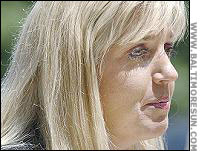 One can assume money problems were the driving force behind Brandy Britton’s decision to turn to prostitution. And with an hourly rate of $300, the pretty, sexy, intelligent blonde former college professor was doing pretty well for herself until the law caught up with her.

Brandy Britton is now dead. She committed suicide in January 2007 before she could be tried on prostitution charges that could have sent her to prison for up to 4 years.

Money has the power to build or destroy. If you are going through tough times right now and desperate to find a way to solve your money problems, think before you act. Brandy Britton’s story could have ended differently. When faced with a desperate situation she twice made a decision that would lead to her downfall. First she decided to engage in an unlawful profession because she was desperately in need of money; then, when caught she chose to kill herself because she was desperately depressed about what was going on in her life and afraid of what was facing her.

Never make life altering decisions when you’re feeling desperate. A mind in a state of desperation is too impaired to be relied upon to make sound decisions. Tough out your desperate times. Don’t go out and commit crimes to solve your need for money. When you get caught you’ll just have a bigger, more desperate situation on your hands.