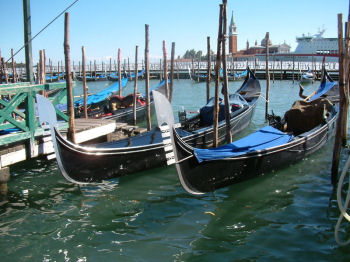 There are certain expectations that come with wealth. One of these expectations is that you will have knowledge of the world. Traveling is part of the “culture” of wealth, which is not to say only wealthy people travel; but certainly one generally needs to have a good deal of money to make a habit of traveling.

The fact that I don’t have a passport should give you a pretty good idea of how much traveling I do; but I’ve made a note to myself to get a passport before the end of the year, because I plan to start traveling as early as 2009; and one of the first places I plan to visit is Italy.

I’ve always been fascinated with Italy, though I can’t really say why. In this continuation of “Travel Italy” I will share some information about Venice Italy. As I see it, just because you can’t travel to Venice doesn’t mean you shouldn’t try to know a little something about the place.

A city which is known for its canals and gondolas, Venice can definitely make anyone fall in love with its splendor. With beautiful streets and quaint buildings lining up along the canals, the exquisite charm of the city brings a romantic mood for tourists.

Located at the northern part of Italy, the city stretches across 110 small islands in the Venetian lagoon along the Adriatic Sea. During the Medieval and Renaissance period (13th-17th century), Venice was an important center of commerce and art. The city of canals was built 600 years ago by its original inhabitants to protect themselves from land-based attacks. They diverted all the major rivers flowing into the lagoon which prevented sediments from accumulating around the city. Due to this, they had created a deep lagoon environment.

The buildings of Venice are constructed on wood piles that were closely packed together. The structures are often threatened by flood tides from Adriatic sea between autumn and early spring. During 20th century, when many artesian wells were built for local water resource, the city began to sink. It was then discovered that water extraction causes it to subside, and so during the 1960s, artesian wells were banned. This was an effective solution as recent studies suggest that Venice is no longer sinking. However, the city is still threatened by frequent low floods.

One of the most interesting features of the Venetian countryside is the villas of the Veneto, as these were rural residences of nobles during the past. These have also beautiful gardens that used to be the venue for social gathering of the elites during the middle age. The UNESCO (United Nations Educational, Scientific and Cultural Organization) declared these villas as World Heritage Site (being of cultural and natural importance to the common heritage of humanity) because of its rich architectural design and its colorful historic past.