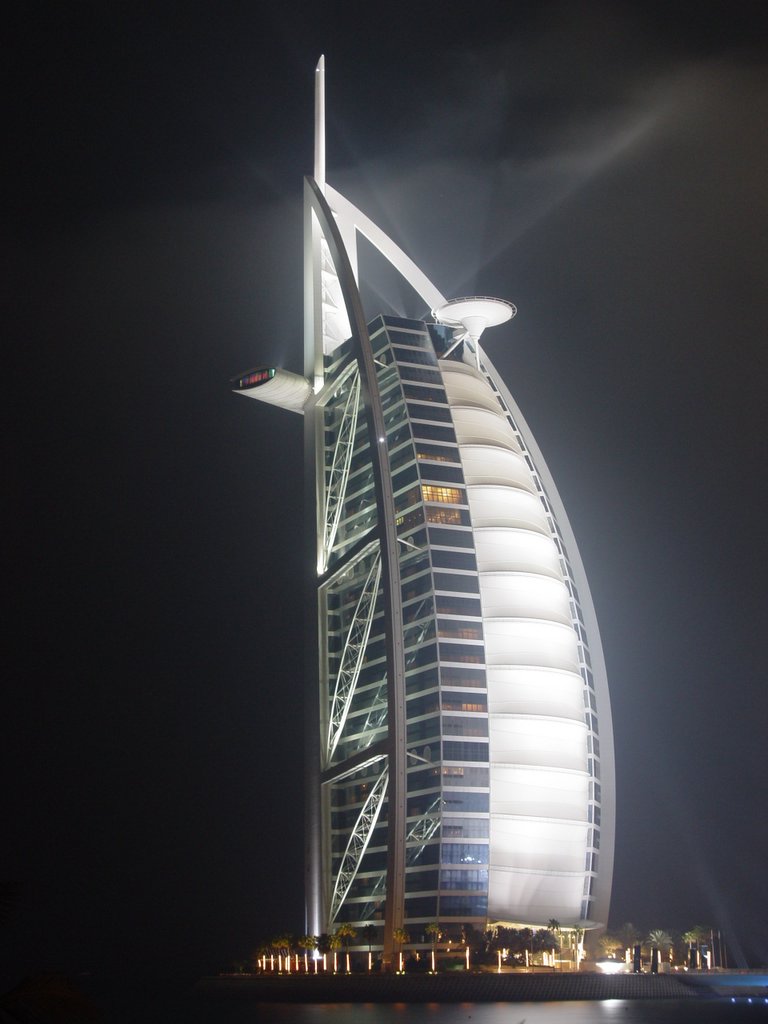 Located in Dubai in the United Arab Emirates, Burj Al Arab is presently the world’s tallest hotel, although it will hold this distinction only until such time as the Rose Tower in Dubai is officially opened. At that point Burj Al Arab will become the second tallest hotel in the world; but it will eventually fall to third place at the completion of the building of the Ryugyong Hotel in Pyongyang, North Korea.

Burj Al Arab stands on a man-made island erected 919 feet offshore from Jumeirah beach with a private bridge connecting it to the mainland. It is designed in the shape of a ship’s sail and rises 1053 feet into the air. Designed by architect Tom Wright with the UK’s Atkins—an engineering and design firm, and Said Khalil of Mitchelsson Group, it took from 1994 – 1999 to complete. It is considered by some to be the best hotel in the world, and is without question one of the most expensive with rates ranging from $1,000 per night to $28,000 per night.

A 5-star deluxe hotel, virtuoso member and acknowledged by American Express Fine Hotels & Resorts, Burj Al Arab contains 202 duplex suites which range from 1,819 sq ft to 8,396 sq ft in size and feature floor to ceiling windows which overlook the Arabian Gulf. Each suite contains a dining area and living area as well as an office area which comes readily equipped for Internet surfing and faxing, printing or copying business documents. There is also a 42-inch plasma screen, video on demand, and access to close to a hundred cable channels. Additional features include amenities for in-suite dining, walk-in shower and Jacuzzi, pillow menu and an in-suite mini bar.

As a Burj Al Arab guest you can enjoy such luxurious experiences as a scenic tour of Dubai via helicopter, access to Majles Al Bahar private beach and access to Wild Wadi Water Park. You can charter a yacht, get chauffeured by Rolls-Royce on a shopping expedition, and golf at world class courses including Montgomerie and Emirates Hills. You’ll have nine restaurants and lounges at your disposal including the award-winning seafood restaurant, Al Mahara, with its massive oval aquarium filled with over a million liters of water.

The very interior of the hotel is said to be a remarkable sight itself with a grand atrium, dazzling fiber-optic displays, fireball pyrotechnics, spectacular marble decorations and 22-carat gold adornments, as well as a magnificent waterfall structure.

Few will argue against the Burj Al Arab being an ornate structure, but not everyone has been impressed with the loftiness and extravagance of the place. One critic referred to Burj Al Arab as a “monument to the triumph of money over practicality”, claiming that the hotel, as well as the city of Dubai itself, “elevates style over substance”. Without question, Burj Al Arab is the definition of extreme opulence; and with such height of luxury naturally comes exclusivity.

If you‘re looking to enjoy a stay in a world class hotel that caters to those who can afford the finer things in life, Burj Al Arab in Dubai comes highly rated.