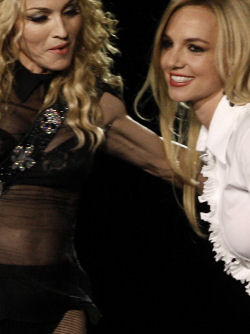 Britney Spears joined Madonna on stage during her Sticky and Sweet tour in LA on Thursday. Britney looked the closest to her old self that she’s looked in a couple of years though it was obvious she’s not 17 any more. As for Madonna, well, sigh, Madonna just looks disturbing.

There’s the temptation to speculate that maybe Guy Richie just lost any physical interest in her. She’s just not sexy. Her body is way too hard. She’s got veins popping out all over the place. A woman needs a bit of softness. Madonna completely lacks a trace of femininity. Maybe that’s the look she’s after but it just doesn’t suit her. She probably maintains her shattered physique because she’s trying to ward off signs of age but it actually makes her look like a drug addicted old woman. Totally unsexy.