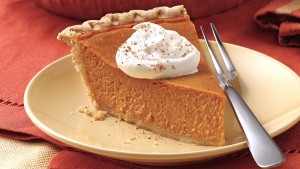 Pumpkin pie wasn’t the neat confectionary we know of today, although its history goes back to the Middle Ages. There are several recipes from both Europe and the Middle East, which discuss stewed pumpkins wrapped in a pastry. Early recipes asked cooks to flavor with spices and sugar, then cover the mixture with cream.

The pumpkin was part of a new class of foods that chefs were just beginning to experiment with. Others in the same class included potatoes, tomatoes, peanuts and corn. These foods weren’t immediately popular either. Historical evidence showed that at least two generations had to pass before the pumpkin was acceptable to most palates.

The pumpkin pie rose to popularity sometime during the sixteenth and seventeenth centuries in Europe. The upper class often had pies with mixed ingredients, and even consumed apple-stuffed pumpkins.The pie would fall out of favor by the 18th century, a fact noted by Edward Johnson. He remarked that he witnessed more people eating apple and pear tarts than the pumpkin equivalent.

Pumpkin pie evolved from a soup. Early recipes advised chefs to seethe the pumpkin until it was well done, then to fry butter and add spices to taste. The next iteration of the recipe used milk passed through a straining pan, which would create a kind of bread from the pumpkin pulp.

When the pie was first made in mainstream Britain, it was made with thyme and rosemary, which is a far cry from the sweet treat we know today.