Notice: This is an excerpt from a fictional novel in progress that is being developed exclusively for richbitchitch.com. This work is copyrighted. You may not reprint without permission. 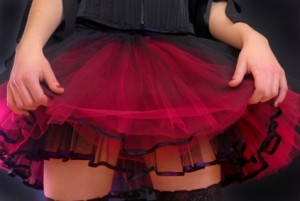 Virginity is interesting. One minute you have it and the next you don’t. One day you’re innocent and the next someone’s had you and so you’re not worth the same; and it only takes a moment for you to be transformed from one state to the other. Even while lying in bed being penetrated, until you are actually popped you are precious and dear and valuable; but once you’ve been broken you are now used and no one will regard you in the same light. It was Lulu who said that to me although in different words. She said it to me the same day I met Richard Berkley. Or rather she said it on the eve of that day while she and I were lying in her bed talking about Madame Sheila’s efforts to sell my virginity. But we talked about Richard Berkley before we got around to discussing how I was feeling about having my virginity negotiated over.

“He’s going to take it you know,” Lulu said to me.

I was lying down beside her on her queen-sized four poster bed looking up at her domed ceiling. She was lying on her back also looking up at the ceiling. As usual she was naked. I was wearing my bra and panties. She always insisted on me taking off my clothes if I was going to lie in her bed.

“I saw him staring at your ass after Madame Sheila sent you upstairs.”

“Men stare at asses,” I said as a matter of fact.

“Yeah, but this man was completely mesmerized by yours. And of course Madame Sheila didn’t fail to notice.”

“I do find it strange that he came here looking for me though. It doesn’t really make sense.”

“Hmm. Seems to make perfect sense to me. He saw you on the TV. He liked what he saw. Him knowing your grandmother has nothing to do with anything. It just provided him with the perfect excuse to come.”

I didn’t really want to believe what LuLu was suggesting even though I had a feeling it was true. I felt somehow that Granny B would be very disappointed.

“He’s kinda handsome though,” Lulu continued on. “Don’t you think he looks like that man from Alias.”

“You know, the TV show with Jennifer Garner?”

“I don’t think I’ve ever seen it. But he looks like the guy that was in The Titanic movie to me.”

“Yeah. I think that’s the same guy from Alias.”

“Hmm. I did think the guy from the Titanic was nice looking.”

“See,” said Lulu. “And you find him attractive too.”

“I didn’t exactly say that. Besides, you know what Madame Sheila says. Whether we find our clients attractive or not is relevant to nothing. They pay us to serve them, to make them feel good. How we feel and what we think means absolutely nothing unless the client wants it to.”

“And even then, we must feel and think whatever they want us to feel and think,” finished Lulu in a voice meant to imitate Madame Sheila.

I laughed briefly then rolled over onto my side. I was still thinking about Granny B, hoping she couldn’t see or hear me and that she didn’t know I was very soon going to become an official whore. I was to have gone to college. That was what she’d wanted for me. I was to have gotten a degree in business and finance and then gone out and started up my own multi-million dollar corporation. And it was all I had ever wanted to make up for what my mother and uncle did to break Granny B’s heart; my mother becoming a drug addict and eventually overdosing on heroin and my uncle committing murder and going to prison then getting killed in prison. Somehow I’d always felt it was up to me to make up for everything that had happened to Granny B from getting raped when she was fourteen and giving birth to Uncle Ivan nine months later, having my mother Harriet two years after that and all the heart ache and tragedy that followed.

Lulu asked what was wrong after I’d gone quiet for a while.

“About how Richard Berkley is a billionaire and if you play your cards right you can have yourself a penthouse apartment overlooking central park and be living like a rich bitch in no time? Because if I were you that’s what I would be thinking about. Not what could have been or should have been.”

Notice: This is an excerpt from a fictional novel in progress that is being developed exclusively for richbitchitch.com. This work is copyrighted. You may not reprint without permission.

More from Memoirs of a Rich Bitch