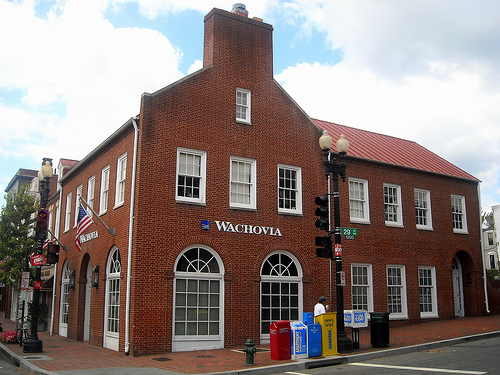 The financial crisis had appeared to allow for a breather yesterday when the Dow Jones Industrial Average went up by as many as 600 points; but today the DOW was back down 700 points following reports that the state of the economy hints at a recession on the way or already present. Exactly what that means I am not knowledgable enough to dare attempt to say.

What I do know is that I have a few dollars in my sharebuilder account and I want to invest it smartly. Wachovia stock is now at $6.06 and I’m thinking about buying a few shares; but I don’t really know what the situation is with Wachovia and Wells Fargo and how it plays into the decision to buy Wachovia stock right now. I might go and buy a few shares and then once the dust from the merger settles there’s a reverse split done which crunches my shares down to something like a fraction of a share or something. I’ve had that done on some of my other stocks and when you only own a few shares to begin with it’s not a very nice thing to have occur.