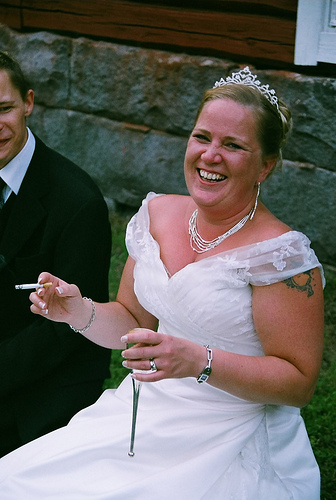 Here’s a picture of a bride on her wedding with a cigarette in her hand. It just seems inappropriate to me. A wedding day is supposed to be special and something about the idea of the bride or the groom taking time out for smoking cigarettes on their wedding day somehow makes it seem like the day isn’t really special for them. I know it’s just a matter of perception, but as I perceive it, the cigarette suggests the smoker isn’t really all that excited about getting married. I understand the nature of cigarette addiction but I’ve seen that my husband can resist smoking when doing so is important enough to him. That he didn’t consider our wedding day to be a day on which he should make the effort not to smoke knowing I hated his smoking was upsetting.

It also suggested that getting his smoke was more important than preparing for our big day.

In the case of the smoking bride, why isn’t she 100% focussed on her wedding? Why would she need a cigarette break in the middle of the festivities? It just doesn’t really look all that appropriate; but then I’m kind of far removed from reality.