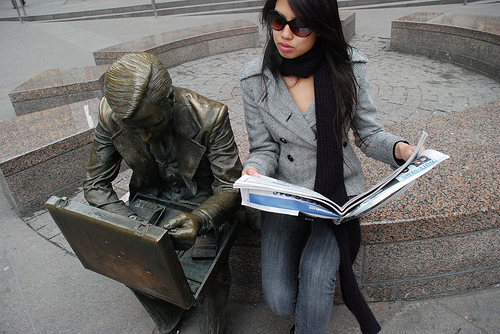 I figured it’s time I did more than wonder exactly what the Dow Jones Industrial Average is all about. I’ve had a stock portfolio (tongue in cheek) since about 2001 and to this moment I couldn’t tell you what it means when they say the Dow is down or up x points or y percent. So I finally got around to doing some research a moment ago, and I came across a newsday.com article titled “Understanding the Dow Jones Industrial Average“.

I won’t pretend it’s all suddenly clear now that I’ve read the article, but at least I’ve taken a first step towards understanding the “Dow Jones”, and I’ve come away with bits of knowledge I did not possess before.

What I’ve learned from the article

What I still need to understand

Image: My Wall street boyfriend and I by findingyeyen via Flickr